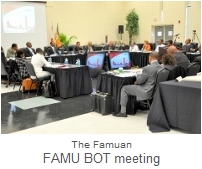 Florida A&M University’s Board of Trustees unanimously approved President James Ammons’ restructuring plan to cut and/or merge 24 academic programs, rename existing schools and slash $18.7 million from the university’s budget, as well as a 15 percent raise in tuition.  The vote came minutes after the BOT heard students, faculty and staff voice their opposition to Ammons’ “Excellence in a New Era: Developing the Millennial FAMUan” restructuring proposal.

“What Florida A&M University will look like years from now will be the result of the hard work of faculty, staff, students and campus leaders who developed a bold, brilliant and progressive course for FAMU for this decade and years to come,” Ammons said.

The plan calls for elimination of 242 positions of which 109 are being paid from federal stimulus dollars. Those stimulus positions, which include faculty and technical staff such as FAMU TV-20 employees, will be terminated on June 30. Forty-two of the 242 positions are vacant, officials said. The plan also calls for a change in the academic structure, which will now include 14 schools and colleges.

CESTA’s Engineering and Technology program will be added to the School of Architecture. There will be a stand-alone College of Agriculture.  Under the new structure, three deans are slated to head the Schools of Nursing, Public Health and Allied Health Sciences. The Division of Economics moves from the College of Arts and Sciences to the School of Business and Industry.

The College of Education lost nine programs, making it the worst affected of FAMU’s academic programs. In the foreign languages, students can no longer major in French and Spanish but will be able to take those courses.

As part of the operational side of the restructuring proposal, the university plans to develop what officials are calling the Administration Service Assistance Program. This program is designed to “eliminate repeatable processes across the campus.” The ASAP unit will handle purchasing, hiring and payroll.

According to those familiar with the plan, ASAP will result in the laying off of many clerical and administrative employees who assist faculty with a wide range of duties. With all the decided cuts, faculty and students were not entirely pleased and had the chance to voice their concerns at the meeting.

Ciara Taylor, a fourth-year student in the language department, protested the plans. Her subtle demeanor soon changed as she began her speech. She said the board “only cared about numbers,” and shocked the room when she accused Ammons of compromising the students’ future.

“Throughout the “Restructuring Plan” that has been constructed by President Ammons, he mentions the future 16 times,” Taylor said. “And although I agree that we should place emphasis on the future, the present students, faculty and staff should take precedence.”

The structuring proposal sought to address the needs of the “Millennial FAMUan.” Ammons proposed the “Academic Success Initiative” to help freshmen and sophomore students graduate in four years. It would also allow upperclassmen to serve as role models and peer mentors for underclassmen.

“We are proud of this restructuring and reinvestment plan because it has helped us to align the strategic plan with the comprehensive restructuring decisions to ensure that FAMU is an environment that nurtures the Millennial FAMUan,” Ammons said.

After BOT approved the plan, trustees said they wanted Ammons to put into place a system to monitor the progress of the new plan.

Marcus Joseph writes for the Famuan , the student newspaper at Florida A&M University, that originally published this article