TALLAHASSEE, Fla. – Nazarius Saah Lamango, an associate professor of medicinal chemistry in the Florida A&M University (FAMU) College of Pharmacy and Pharmaceutical Sciences, received a patent to treat cancers using compounds that block the activity of a unique enzyme. The activity of this enzyme is elevated in some tumors. Specifically, inhibiting the excess amounts of this enzyme would diminish its ability to process the target protein into the forms that promote tumor cell growth.

Lamango further explains how this patent can benefit society. 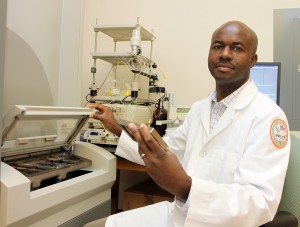 “The patent describes compounds that can be used to inhibit the activity of an enzyme that we have found to be abnormally high in the tumors of some patients,” said Lamango.  “By being able to use these compounds to bring the abnormally high enzyme activities in the tumors down to normal physiological levels, their ability to spur tumor growth will also be inhibited. When further developed into drugs, these compounds will constitute a new class of anticancer drugs with a novel mechanism of action.”

Lamango’s work was funded by grants from the National Institutes of Health (NIH). The NIH is the agency of the U.S. Federal Government tasked with managing the biomedical research budget.

According to Lamango, this enzyme, which is the target of the compounds described in the patent, is a member of a biochemical pathway for processing proteins, some of which regulate cell growth. Some of these proteins have been known for over a decade to play roles in some cancers and are said to be oncogenic, the potential of a gene to cause cancer.

Lamango explained that while conducting research on Parkinson’s disease, he found that this pathway may be involved, albeit in an opposite fashion, in degenerative disorders.

What inspired Lamango to pursue this patent?  He expressed that any research that will contribute to diminish cancer needs careful attention.

“I know people who have had cancer and passed away from the disease,” said Lamango.  “The thought of being diagnosed with a cancer is always scary. The statistics that more than 12 million people were diagnosed with cancer worldwide in 2008 and that more than 7 million people actually died from it is a daunting statistic.  According to the American Cancer Society Cancer Facts and Figures for 2010, 1.5 million cancer diagnosis and almost 600,000 cancer deaths were estimated to have occurred in the United States last year. Although Florida is only the fourth largest state in the U.S., population wise, it comes second only to California in the number of cancer diagnoses. Therefore, no matter how you look at it, cancer is never far from the mind. As a researcher, any thought or research finding that could lead to a contribution in diminishing the impact of cancer on society is always worthy of careful attention.”

Lamango is an individual that is no stranger to securing patents.  He has one patent that is licensed by a private biotechnology company.

In 2002, he received a patent (US patent number 6,372,793) regarding a method for treatment of a neurological disease characterized by an impaired neurological function. In 2006, it was licensed to Signum Bioscience, Inc.

Lamango received his bachelor of science degree in agricultural chemistry and a Ph.D. in biochemistry from the University of Leeds, United Kingdom.  He also received postdoctoral training from Louisiana State University Medical Center in New Orleans, La.

He holds memberships with the American Society for Biochemistry and Molecular Biology and the America Association for the Advancement of Science.